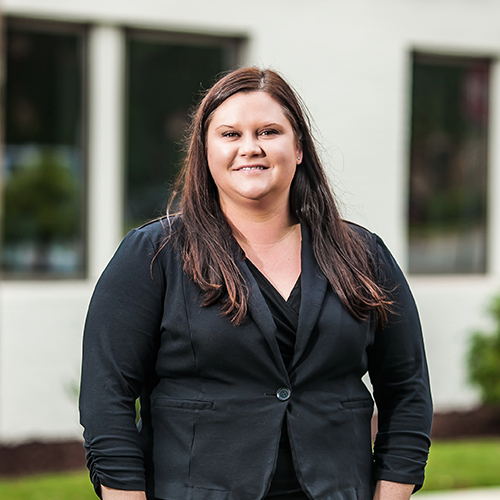 Jessica Cornette Faulk is a 2005 graduate of East Carolina University where she majored in Political Science with a minor in Business Administration. Following graduation, Jessica worked with Hospice and the Public School System in her hometown where she learned valuable skills in compassion, grief, and leadership. Jessica is a 2009 graduate of the Norman Adrian Wiggins School of Law at Campbell University. While in law school, Jessica was an Articles Editor on Campbell Law Review and a Legal Research and Writing Scholar. She tutored and counseled numerous students in legal research, writing, and citation. She also was actively involved with the admissions office as a Team Leader for Student Recruitment, where she assisted in recruiting top undergraduate students to Campbell Law School.

During the summer of 2007, Jessica was an intern at the Harnett County District Attorney’s Office, where she found her love of litigation and the courtroom. Following law school graduation, Jessica was an Assistant District Attorney from 2009 to 2015. During her time as an ADA, Jessica tried hundreds of cases in both District and Superior Court including violent crimes, drug crimes, and property crimes. In the beginning of 2016, Jessica moved to Wilmington and began her career in personal injury.

Jessica joined Speaks Law Firm in 2017 where she concentrates her practice in personal injury and workers’ compensation. She has assisted hundreds of clients in their injury cases and serves as the head of the Speaks Law Firm Workers’ Compensation team.